Sunday night in St. Maarten ended up just being Hubby & I. Due to mechanical problems, the rest of the family got stuck in Miami for the night, unable to fly in to SXM until Monday afternoon. Since Hubby &I had had a few celebratory cocktails ;) we decided to go somewhere in walking distance. Only thing was, we had no idea what was around! So we asked the security guard at the gate, who pointed us in two different directions. We ended up at Topper's (not the main one on Welfare Road, but the one at Pelican Key). This was a very laid back place, situated right on the beach - kind of like a large open air tiki hut strung with Christmas lights. They even had some tables situated right in the sand.

They had a pretty varied menu, though surprisingly not a lot of seafood choices. We started with the Hummus & Baba Ghanoush (trying to be healthy). For my entree, I had the Gnocchi, which was amazing - tons of goat cheese & spinach. Hubby had the Roast Pork, which ended up being completely different than what he expected. Personally, I thought it was delicious, though it was more Southern style than what you would expect in St. Maarten.


Our experience there was interesting. We got there and there was a wait, which was not a problem for us, so we took a seat at the bar and ordered cocktails. We then were seated but didn't see a waitress for about 20 minutes. Finally she came and got an appetizer order, but didn't get our drink order. Our appetizer came and then she the waitress returned and we ordered a bottle of wine and our meals. Well, 45 MINUTES LATER, still no food or wine. So, feeling good, I walked up to the manager (she is a story in and of itself) and explained the situation. Apparently our order did not get placed, but we got a free bottle of wine, which made it a lot better. Overall, we had a good time though with the lackluster service and so many other restaurants in the area, we probably would not return. 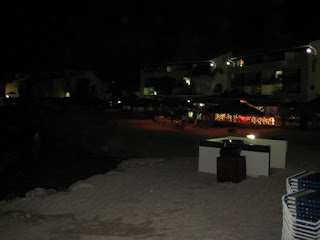 Toppers can be seen in the distance with the lights