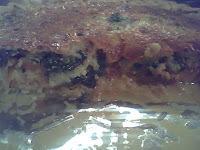 I made this delicious quiche last night for dinner. It basically is the product of taking parts of about 4 different quiche recipes I found online and making one that is my own.

Heat butter in a large skillet over medium high heat until melted. Put all of the bacon into the pan and cook until crispy, constantly serving. Move bacon to paper towels to drain.

Drain enough of the bacon renderings that only enough is left to coat the bottom of the pan. Put the onion into the pan and saute until caramelized. Remove onions to the paper towels.

In the same pan, saute the spinach until wilted. Remove spinach to the paper towels.

In a medium bowl, whisk the 5 eggs until fluffy. Then add the buttermilk and half & half. Whisk until well blended. Add salt, pepper, nutmeg and red pepper flakes to taste.

Bake 40 minutes or until center is set.