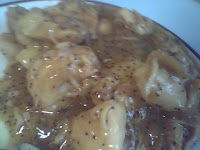 Now that our crazy business time is over, hubby and I are back to cooking pretty regularly. Last week, I was looking for healthy, fairly quick meals and came across this Rachael Ray recipe. Since it is just the two of us, and neither of us really ever eats leftovers, I halved this recipe - which was the perfect amount for the 2 of us. I really liked this recipe, which was super easy. The chicken was sweet and tangy, but not too sweet. I also liked the potatoes, which were a nice change from the standard baked potato, gratin, mashed, etc. Hubby loved the chicken, but come to find out, is not a huge fan of dill - so I won't be making the potatoes again.

(this is the full recipe, not halved)

In a medium pot, add the potatoes and enough cold water to cover by one inch. Cover the pot and bring to a boil. Salt the water, lower the heat and simmer the potatoes, uncovered, until fork-tender, 12-15 minutes.

While the potatoes are working, in a large skillet, heat the EVOO, about two turns of the pan, over medium-high heat. Season the chicken with salt and pepper and cook in the skillet, turning once, until browned, two minutes total. Add the shallots and cook for three minutes. Add the vinegar and cook until slightly reduced, one minute. Add the chicken broth, apricot preserves, honey and poppy seeds and simmer over medium-low heat, stirring. Stir in one tablespoon butter.

Drain the potatoes, return to their pot and add the remaining two tablespoons butter, the dill and salt and pepper to taste. Serve with the chicken.