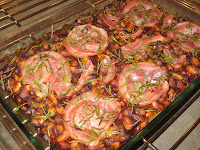 This is a Tyler Florence recipe that I have had for quite awhile, but just last weekend finally made. They were wonderful!! I have had quite a few baked beans in my life, but never any like these. The rosemary is so unexpected, and plays wonderfully with the pancetta and the adobo. These were very, very spicy.


The original recipe called for the mixture to be spread among 4 separate dishes, however I made it in one big casserole dish - which worked just fine. I actually used small cans which did not quite equal the three large cans. I attribute that fact to the super spiciness. Next time, I will use the big cans.

This recipe is definitely a keeper!

Preheat the oven to 350 degrees F.

Put the molasses, ketchup, mustard, and chiles in a blender and puree. Scrape that into a big bowl, add the beans and season with salt and black pepper, and gently toss so that the beans are coated with the molasses mixture. Divide the mixture evenly amongst individual crocks. Top with pancetta (trying to cover most of the surface), sprigs of rosemary and drizzle extra-virgin olive oil all over.

Bake in the oven until the bacon is browned and fat is rendered, about 40 minutes.