If you didn't know about it you would never find it. It's probably the funnest idea for a bar I've ever seen - and rumor has it there's a place like this in Carytown - any takers? (We firgured if anyone would know, it would be The Marinara's)

The Sister-in-law kept telling us about this secret bar in New York City where you have to go through a secret phone booth to get to...Interesting. 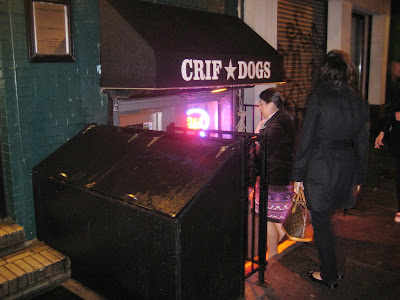 The premise is a 1920's prohibition era speakeasy, and it plays the part perfectly. To find this hidden gem, you go to Crif's Dogs. A hot dog dive in lower Manhattan. Think a much more gourmet (not uppity, because this place is a dive) River City Dogs. Nearly every hot dog is wrapped in bacon. My favorite had Gruyere and black truffles, but they had a redneck dog that was battered and deep fried and soaked in buffalo sauce, they also had a hippy dog with sprouts and hummus. 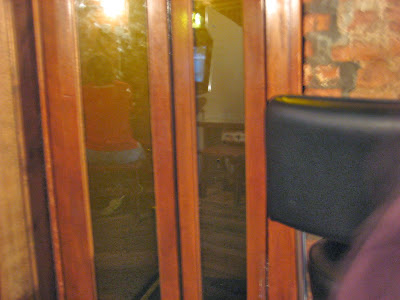 So you walk into Crif's Dogs, and on the left is a wooden phone booth. You step inside the phone booth, pick up the phone and push a button. Voila - the back wall of the phone booth opens and a woman is there to check your party. They only let about 30-40 people in at a time, and to get one of the 4 or so booths, reservations are accepted the day of only. We sat at the bar.

The bartenders are dressed in 1920's attire. This place definitely has the feel of am underground speakeasy. Dark walls, low ceilings, and amazing handcrafted cocktails.

I'm talking classic with herbs, bitters, and home made mixers - not syrupy sex in the city concoctions.

I had a martini and it was perfect (their secret ingredient is a dash of orange bitters). The Wife had a bacon infused bourbon with maple syrup and orange zest. You could really get the pepper from the bacon and the syrup. It reminded her of pancakes and bacon - who wouldn't love that at 90 proof?

The Sister-in-law took the bartenders recommendation and had his favorite concoction - something she and The Wife agreed "tasted like fall" lots of hints of cinnamon, a little sweet - and a star anise floating in it.

Definitely worth the trip if you make it to the Big Apple. Crif's Dogs is located at 113 St. Marks Place, NY, NY. If you google Crif's Dogs NYC you can find it. PDT is through the phone booth on the left.

I apologize for the lack of pictures - but as you can imagine it's a secret so they kind of frown on photography, but here's a link that has a few great shots of the inside.