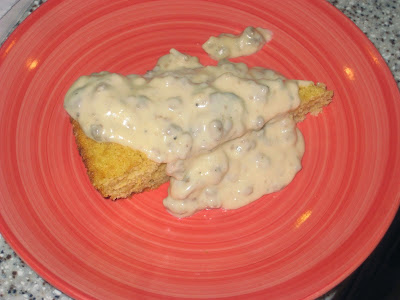 Over Thanksgiving, the in-laws had picked up more venison from processing. We had it split among tenderloin, ground venison and sausage. I had to try the sausage, but my father-in-law is gluten intolerant, so whatever I made had to be sans gluten.

Being a good southerner, I have a special place in my heart for sausage gravy. I can't make it at home because The Wife cringes at the word "gravy" (a fit passed on to her from her very health conscious mother.)
Also from being a good southerner, I know sausage gravy needs to be served over some kind of bread - typically biscuits. I was short on ingredients, but being a gluten free household, they had cornmeal...connect the dots. Sausage gravy over cornbread.
You'll want to make the cornbread first, and while it's in the oven make the sausage gravy.
Corn Bread 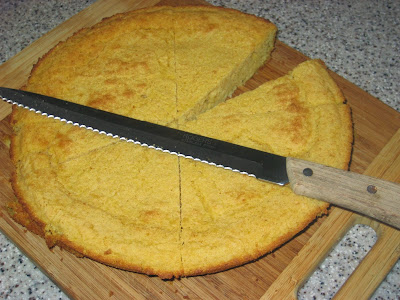 I found this on recipezaar. It's simple to make and comes out light and spongy, not dry at all.
Ingredients:
2 eggs
2 cups cornmeal
1 Tsp. Baking Powder
1 Tsp. Baking Soda
1/4 cup Bacon Grease (I used butter)
Pinch of salt
Directions
Preheat the oven to 425.
Mix the wet and dry ingredients separately (EXCEPT THE BACON GREASE) and whisk together. Grease a 10 inch cast iron pan with the bacon grease, or butter, or lube of your choice and heat on medium to high heat, until it just starts to smoke.
Pour mixture into pan, stirring as you pour to make sure grease makes it up the sides of the pan.
Put the mixture in the oven for 15-20 minutes, or until it is golden brown and a toothpick comes out clean.
To invert cornbread, simply place a plate over the pan and flip.
Sausage Gravy 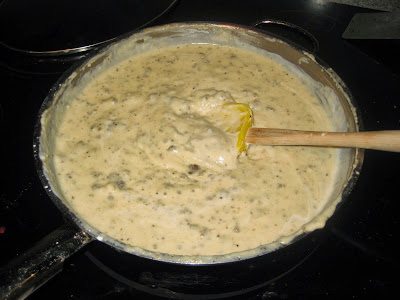 While searching for a good venison sausage gravy recipe, I stumbled across this recipe from www.bigoven.com another recipe site that I had never heard of, but like. It turned out fantastic. It was spicy, but not too hot, and thick, not runny like fast food sausage gravies.
Ingredients:
1 lb. of Sausage
1 (12 oz.) can of evaporated milk
1 cup of all purpose flour (because I was cooking gluten free, I used cornstarch - a much smaller amount though so it didn't get gummy)
1 Tbsp. Pepper
1Tsp. Salt to taste
Hot Sauce
Directions
Premeasure your ingredients so they're ready to go while you're cooking.
Brown your sausage in a large pan with about a tablespoon (or more!) of hot sauce, making sure to break up lumps of sausage until it is about the size of peas.
When sausage is browned thoroughly, lower the heat and add flour (or small amount of cornstarch.) Mixing until it has coated the sausage, and there are no lumps.
Add salt and pepper to taste.
Add the evaporated milk and about one cup of water. You'll want to play with the flour/cornstarch ratio until you achieve the thickness you desire. If it gets too thick, add more water (I used buttermilk for a more tangy flavor instead of water.)
Keep stirring until you achieve the desired consistency.
Serve over the bread product of your choice!
Breads Breakfast Cornbread Sausage Venison