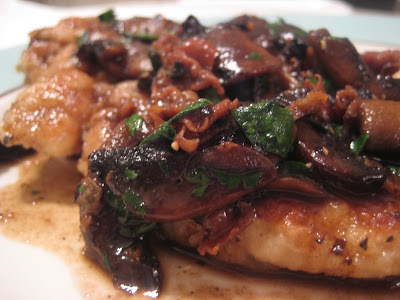 It's not often Hubby comes to me with a recipe and asks me to make it for him. I think the last time was probably this amazing 8 Layer Smith Island Cake.  So when he came to me with a recipe he pulled from the latest issue of Men's Health, I figured why not.

This isn't the first recipe I've made from that family of magazines. Back awhile ago, I made the Chili Chicken and Basil from my Women's Health magazine. Both of these magazines have recipes that either incorporate key "super" foods you should be eating on a regular basis or take a recipe that if you ordered at a restaurant would be completely unhealthy and over the top calorie wise, but - by making at home actually becomes a fairly healthy meal. The latter was the case with this recipe.


This recipe was simple, not one of those recipes with a zillion hard to find ingredients. I have a confession to make though. I actually have never pounded out chicken breasts before. Hubby has, but whenever I've had a recipe that has called for that before (which only has been once or twice), I have cheated and bought the chicken cutlets (I know, not quite the same). Anyways, this time I forgot to do so, so that was definitely a first. Thank goodness for a large stainless steel meat mallet/tenderizer that Hubby had insisted we needed.

Needless to say, the chicken was excellent.  Hubby was a huge fan and was patting himself on the back for finding this recipe. It was deliciously (I doubt that's a word, but oh well, you get the point) savory. Proscuitto, mushrooms and wine are just one of those combinations that marries so well.

I made this for Sunday Supper, but because of the ease of this recipe and the quick cooking time, this would be a great week night meal.

Season each breast with a pinch of salt and pepper. Place the flour in a shallow bowl, add the chicken, and coat the pieces evenly, shaking off any excess flour.

Heat the olive oil on medium in a large nonstick pan or cast-iron skillet. Add the chicken (don't overcrowd the pan; do two batches if necessary) and cook for 3 to 4 minutes a side until the breasts are golden brown on the outside and cooked all the way through. Transfer them to a serving platter and keep them warm.

Add more oil to the pan if needed, and sauté the prosciutto for 1 to 2 minutes until it starts to crisp up. Add the mushrooms and continue sautéing until they're well browned.

Stir in the marsala and broth, scraping up any browned bits stuck to the bottom of the pan. Cook until the liquid has reduced to about 1/2 cup. Season the sauce with salt and pepper and add the parsley. Pour the sauce over the chicken. Makes 4 servings
Chicken Mushrooms Proscuitto Wine