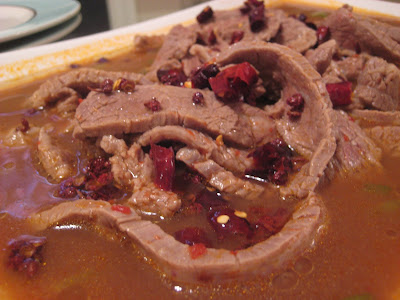 With this recipe came quite a few firsts - my first time (I'm pretty sure) making a Chinese dish, first time going to an Asian Supermarket and my first visit to Penzey's Spices.

When Hubby emailed me this recipe he found on the site, Appetite for China, the subject line was "Willl You Make This for Me?". So, of course, I'm thinking he probably wants me to make some pasta dish or Southern dish - all of which I'm completely comfortable making. Then I open the email and see think link and see "china" in the link, which definitely gave me a bit of heartburn.

You see, as I've said before, up until I met Hubby, I didn't really eat Asian food of any variety. Wasn't a big sushi fan, didn't like Chinese or Japanese food. The one Asian restaurant I would go to back home was a place called Fiji Island, that served Polynesian food. And even there I usually would get shrimp stuffed with crab - not exactly typical Asian food.

I don't know if it was falling in love with a man who loved Asian food or as I've grown older my tastes have matured or maybe a combination of both. Now, I eat sushi regularly, I actually really like Thai food and I'm even starting to like Pho (which is a good thing cause Hubby is obsessed).  Anyways, though I've come around to eating some of these dishes, I haven't ever attempted to make anything of the sort.

All that aside, I promised Hubby I would make this dish and so I set out to do so. Since I'm menu planning now (or trying to), I went through my recipes for the week this past weekend and wrote down everything I needed to get. Well, after going to quite a few places, I wasn't able to find "Yellow Rice Wine" nor Sichuan/Szechuan Peppercorn. Hubby suggested that when I had some time this week I take a trip to the Asian Supermarket (the one at Broad & Horsepen).

I had no idea what to expect walking into this place. First of all, it was alot bigger than I expected. Second, I was the only non-Asian person there, which was fine by me. Only problem was, no one was speaking any English. AND of course, I was struggling to find what I needed. I found the spices, but didn't see anything that said Sichuan Peppercorns. I found a packet that looked to be ground red pepper and said Sichuan on the label. I took this over to several of the clerks, but language was a big barrier.

My next problem was trying to figure out which of the Rice Wines was what I needed. The recipe called for Yellow Rice Wine. Well, they had tons of Rice Wines. Some that were red, some clear and some yellow. Except for the fact that the yellow colored ones were marked White Rice Wine. Ummm....okay. So I went in search of somebody else to help me. Three people later and found I really nice young guy that spoke a very limited English. He told me (which I don't know if it is true or not) that Yellow Rice Wine is the same as the one marked White and also the clear and red colored wines. So I chose one with a yellow label, that was yellow in color. Ha.

This was Tuesday. So I went home, intent on making this dish that evening. Upon further inspection though and a little online research, I realized that my packed of powder, that I was hoping was ground Sichuan Peppercorns was most likely not. My next Google search was for substitutes for Sichuan Peppercorns. A few suggested using regular black peppercorns, but most said there were absolutely no substitutes. Great. Hubby got home and I explained the dilemma. He suggested I call Penzey's down in Carytown, which I had never heard of before. Sure enough they had it, but were closing in two minutes.

The next day I made my first visit to Penzey's. I can tell you it definitely won't be my last. For someone who likes to cook or bake, this place is a paradise. All of their spices can be found in several different sizes, some in glass jars and some even in plastic bags. One of my favorite things about this place is that they also have a big jar of each of the spices specifically for customers to open the lid and smell the freshness and intense smell of the spice they are buying.  Not only did they have the Sichuan Peppercorns, they had a zillion other Peppercorns as well. There were alot of spices I had never even heard of.

Okay, so the dish itself. The recipe, once you have all of the ingredients, is fairly easy. And it's quick.

The flavor of the broth was delicious - though not as spicy as I expected. This chilis were pretty darn hot. So I wouldn't recommend this dish for children or for those that don't like heat.

Hubby said it wasn't quite what he expected. He was thinking it would be sweeter. He also loved the broth. He really liked the flavor of the Sichuan peppercorns but didn't like the whole peppercorns being served with the dish. He said he also didn't see the point of the celery (but in all fairness, this isn't the first dish that he has said that about celery).

I definitely think this dish is worth trying.  Hubby & I agreed that next time I make it (and I will again), we are going to tweek it a little bit more to our liking.

Allow beef to marinate in rice wine and salt mixture for 10 to 15 minutes while you prepare other ingredients.

Heat 3 tablespoons of oil in a wok until just smoking. Stir-fry chilis and Sichuan peppercorn until fragrant and the chilis begin to blister, about 1 to 2 minutes. Immediately remove the spices and set aside in a small bowl, leaving oil in the wok. When chilis are cooled, roughly chop them and return to the bowl with Sichuan peppercorn.

Reheat wok and stir-fry celery and scallions until just cooked, about 1 to 2 minutes. Sprinkle with about 1/4 teaspoon of salt, then transfer to serving dish.

Add more oil to the wok if needed. Over medium heat, stir-fry chili bean paste until fragrant, about 30 seconds. Add chicken stock and dark soy sauce and bring to boil. Lower the heat to simmer. Add cornstarch mixture to beef and mix well. Drop beef slices into wok and simmer until beef is just cooked, about 1 to 2 minutes (took mine 4 minutes). Spoon beef and sauce into serving dish over vegetables.

Sprinkle chopped chilies and peppercorn on top of beef. Working quickly, heat another 2 tablespoons of oil until just smoking. Remove from heat and pour oil over beef dish, causing it to sizzle. Serve immediately; if you're quick, the dish will still be sizzling a when you bring it to the table.
Asian Beef Chinese Spicy