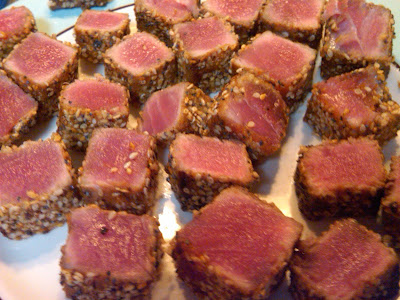 While in Roanoke over the Mother's Day weekend, we went to a new restaurant there called SoRo. One of the appetizers we had was called "everything tuna bites." Kind of like an everything bagel on the outside of seared tuna. These were great; very flavorful and what's more healthy than fresh tuna? Well, as usually happens a few days later I have a craving for these and thought I could recreate them...I was right.
These are really simple to make and you can change up the spice coating to suit your tastes - add more spice, or more ginger...you can't go wrong. That's why I'm not listing amounts by the ingredients, because it will change with your preferences and the amount of tuna you have.
Ingredients:
Ahi Tuna steaks - cut into 1 - 1 1/2 inch logs
Soy Sauce
Sesame Seeds
Poppy Seeds
Ginger Powder
Garlic Powder
Black Pepper
Onion Powder
Cayenne Pepper
Directions:
Cut your tuna into logs about 1 - 1 1/2 inches in thickness ( it doesn't matter how long they are because you'll slice them later - it's a nice effect that makes them almost look like sushi rolls.) Let the logs soak in soy sauce for about 30 minutes, just long enough to give it some flavor without being over powering.
Preheat a pan with olive oil over medium to medium high heat (you know your stove top - we're looking for a light sear to just cook the outside while leaving the inside raw.)
Add sesame seeds, poppy seeds, ginger powder, garlic powder, black pepper, onion powder and cayenne to a dish suitable for dredging (I find a Tupperware container works perfectly.)
Press your tuna into your spice mixture, turn and repeat so that each side is coated. 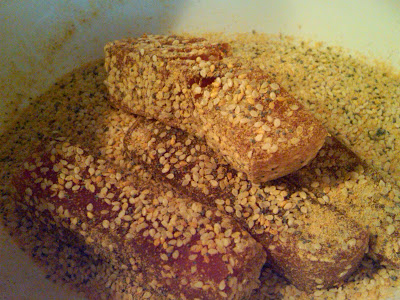 When your oil is hot, place your tuna logs into the pan - only do about 4 per round so you don't crowd the pan. I seared these for 30 seconds per side - you can go a little longer depending on how you like your tuna cooked. 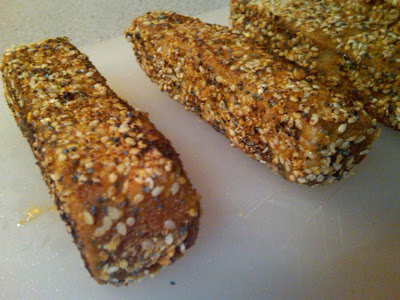