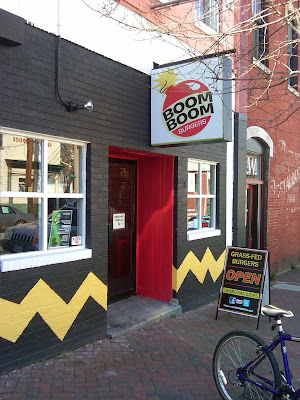 It's a chilly Friday afternoon, and I just finished my first boom boom burger. A BBQ Boom Boom to be exact.

If you haven't yet heard of Boom Boom Burgers, tucked away on Franklin Street in Shockoe Bottom near Juleps, you soon will. I know, because some publication was in today taking pictures - so I'm sure an article is forthcoming.
This is the kind of place you naturally want to support. All of their ingredients are fresh and local. The beef is all grass-fed. The bacon and cheeses are made at local farms and the bread is from Flour Garden Bakery.
When you walk into Boom Boom, there is seating around the walls, with bar stools, and two big farm house style tables in the middle. This is a credit only establishment, and instead of a cash register, you pay via iPad and can have your receipt emailed to you.
There is something to be said for knowing your core competency - doing one thing, and doing it very well. You can see that in their menu. Some would call it sparse, with only four burgers and two vegetarian options. I prefer to think of it as simple - and there can be beauty in simplicity, and in this case there was.
Having read their menu on the website, I was all set to order a Shroom Boom (oyster mushrooms, swiss and ketchup for $10) but this was not an option in person as it was taped over. I opted instead for the BBQ Boom - and because I had been advised by people from the office that the burgers ran small, I made it a Boom Boom (double) for an extra $3. There is an option (although I didn't partake this time) to add an egg to any burger - gotta love that.
The burgers are made fresh when you order them. I don't mean assembled fresh, I mean made fresh. There are actually guys in the back making patties out of ground beef. The burgers are then broiled with cheese and assembled. The roll is my favorite part of this burger. It's almost flaky like a croissant, but not really. It was sturdy and up to the task of playing a supporting role to two patties of grass fed beef. And the buns were toasted, and had the slightest char around the edges. If anything was lacking - I could have used more of the house made barbecue sauce. It had a little sweet up front and a lingering heat that always found my taste buds at the right time. 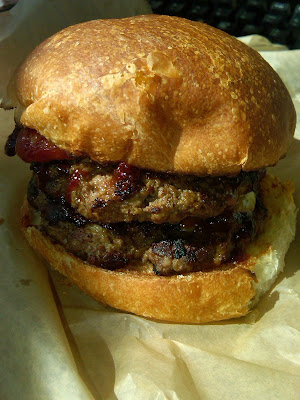 I liked that these burgers were not dripping in grease. Although it's big and filling, you can eat it without making a complete mess and also avoid that afternoon crash that usually follows a big lunch.
Boom boom doesn't have traditional sides - instead they have seasonal fresh sides. Today's options were a two cheese mac and cheese or greens. They also always have sweet potatoes. I forwent the sides today, thinking I had done enough damage paying $13 for a burger. 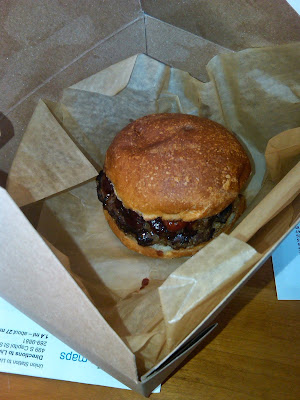 That's the one thing you should know about this place. It's a little pricey - with burgers ranging from $8-$10 - and $3 to make it a double. That's the price of all natural, local good food, I guess.
I'll continue to frequent Boom Boom - I want an establishment with their focus on fresh and local to succeed. Although it's a little more expensive that other places, it's worth the extra few bucks for the quality of ingredients and house made condiments. That barbecue sauce alone is worth the trip.
Burger Restaurants