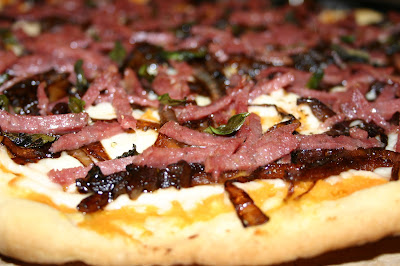 The Husband & I love pizza - who doesn't, right? But I don't mean just the standard supreme or pepperoni.  We make our own pizzas on almost a weekly basis.  Mostly, we just get creative, hardly using a recipe (other than for our favorite go-to pizza dough).

But when I came across this recipe from Food & Wine (another that I had pulled quite awhile ago), it was so unusual and not like anything we'd made before that I definitely wanted to give it a try. 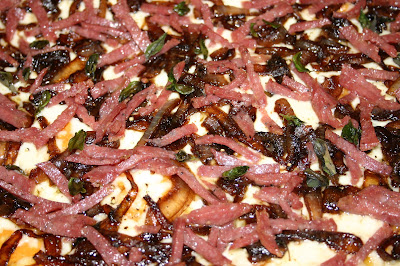 I can't say enough about how amazing this pizza is.  It's very different, but in a great way.  The Husband and I both loved it - though he did ask me to add more salami next time! I found it addictive and have to admit I ate way too much.


Mashed sweet potato replaces sauce in this pizza and the salami replaces your typical pepperoni.  The balsamic caramelized onions are out of this world and work so well with the salami and sweet potato.  Mozzarella is the perfect cheese for this pizza.  The oregano is not only tasted through the garnish, but it really comes through in the onions as well.
A few notes:
- The original recipe calls for soppressato in place of the salami that I have used. I was unable to find the soppressato and had read that salami was a good substitute.
- The recipe calls for a store bought pizza dough.  If you have the time, I would highly suggest making your own.
- I used a yellow onion in place of a white one. Still delicious.
- Food & Wine's suggested wine pairing is "juicy, medium-bodied Pinot Noir".
Sweet Potato, Balsamic Onion & Salami Pizza
1 tablespoon unsalted butter
1 tablespoon extra-virgin olive oil
1 large white onion, thinly sliced
1 oregano sprig, plus 1 tablespoon leaves
1/4 cup plus 2 tablespoons balsamic vinegar
Kosher salt and freshly ground pepper
1 cup prepared mashed sweet potatoes
One 12-inch prebaked pizza crust
1 1/2 cups shredded mozzarella (7 ounces)
4 ounces thinly sliced salami, cut into thin ribbons

Preheat the oven to 450°. Set a pizza stone on the bottom of the oven (alternatively, the pizza can be baked directly on the oven rack). In a large skillet, melt the butter in the olive oil. Add the onion and oregano sprig, cover and cook over moderately low heat, stirring occasionally, until softened, about 5 minutes. Add 2 tablespoons of water to the skillet and cook over moderate heat until the onion is caramelized, about 10 minutes; add a few tablespoons of water to the skillet if necessary. Add the balsamic vinegar and cook over moderate heat, stirring occasionally, until it has evaporated, about 10 minutes. Discard the oregano sprig and season the onion with salt and pepper.

Spread the sweet potatoes over the pizza crust. Top with the mozzarella, onion and salami. Scatter the oregano leaves on top. Slide the pizza onto the stone and bake for about 10 minutes, until bubbling and golden in spots. Cut into wedges and serve. 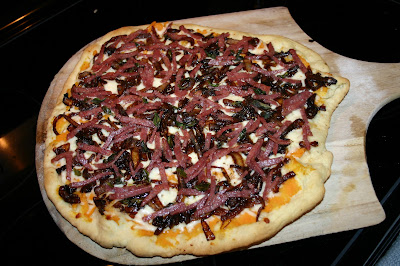