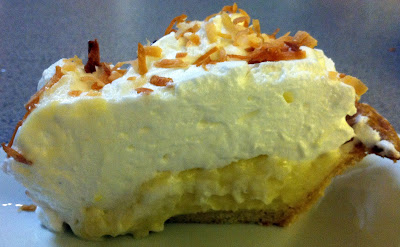 Coconut for most people is a take it or leave it kind of thing.  In this house, we love coconut though we don't cook with it much - the last time being the insanely delicious Tequila-Lime Coconut Macaroon Bars I made back at the beginning of the summer.

I came across this Cooking Light recipe when I was looking for a "not completely over the top" - aka not a 1,000 calorie a serving dessert for an in-home date night (I've found we now have more of these since the Baby entered our lives). 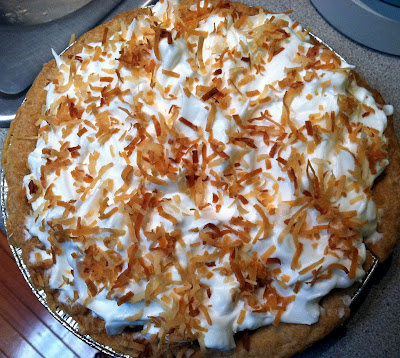 This recipe is not one to choose if you are in a hurry. There's a process with this - necessary to create all the flavor of a full fat/calorie version but at a 200 calorie per serving reduction.

It was definitely worth the extra time put into this.  If I tasted this pie at a restaurant or diner, I would never guess this was a "light" version.  The Husband and I loved it - and I must admit, it didn't last long in our house!

A few notes:
- I used a frozen pie crust instead of refrigerated pie dough.  This eliminated steps 1 and 2 - I just prepared the crust per the directions on the package.
- I realized after the fact that I accidently used 3 egg yolks instead of the 4 the recipes calls for. It worked just fine with only 3.
- Though it says to chill for at least 3 hours, we found that it was significantly better the next day after having the night to firm up
.
Coconut Cream Pie (Lightened Version)

Place 3 egg whites and cream of tartar in a large bowl; beat with a mixer at high speed until soft peaks form. Combine 1/2 cup sugar and 1/4 cup water in a saucepan; bring to a boil. Cook, without stirring, until candy thermometer registers 250°. Pour hot sugar syrup in a thin stream over egg whites, beating at high speed until thick. Spread meringue over pie. Cover and refrigerate at least 2 hours. Top with toasted coconut before serving.
Coconut Cooking Light Dessert Pies