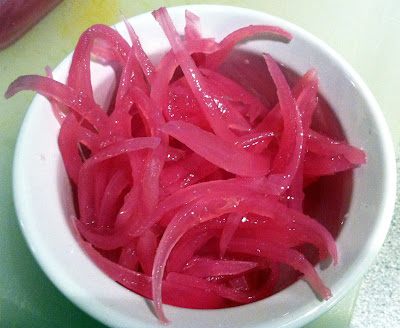 I fell in love with pickled red onions when I had them at Pescados China Street.  Since that first time (more than a year ago), I've been wanting to make them.  Then it so happened that I came across two recipes that called for them.  So, I figured this was perfect - I'd make them and we could have them in two very different meals back to back.

After looking through many different recipes and guides on pickling, I ended up adapting one from David Lebovitz, using one of his suggestions for alternate flavors.

These turned out even better than I could've hoped for.  We used them with Mexican pinto beans and with Greek food and the flavors worked with both.

The single chile pepper managed to impart quite a bit of heat and was amazing against the spice of the cinnamon and star anise.

In a small, non-reactive saucepan, heat the vinegar, sugar, salt, seasonings and chile until boiling.

Add the onion slices and lower heat, then simmer gently for 30 seconds.

Transfer the onions and the liquid into a jar then refrigerate until ready to use.

Storage: The onions will keep for several months, but I find they’re best the week they’re made.
David Lebovitz Sides Vegetables Vegetarian