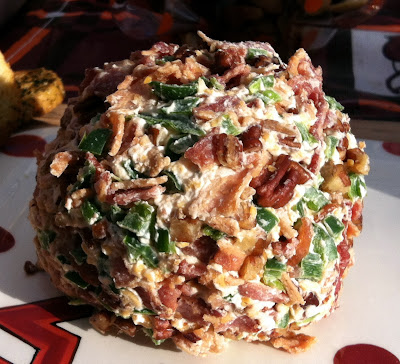 Bacon AND jalapeño? Throw in some roasted pecans and spices? In one cheese ball? Sounded pretty darn perfect to me when I came across it on Homesick Texan.

And I know it's going to come as a shock, but this was just fantastic. A huge hit at our tailgate, it got devoured quickly and received rave reviews from everyone.

Don't worry - the heat of the jalapeños is tempered just enough by the cream cheese as to not overwhelm your mouth.  We all know that cheese and bacon are a good pairing as well.  There's that homey nuttiness from the roasting of the pecans and smokiness from the cumin.  The lime gives it just enough brightness and there is that savoriness that you get from Worcestershire sauce. A lot going on that just melds together perfectly.

There really isn't a lot more that I can say about this other than it was absolutely delicious. It was easy to put together. I will make it again.

A few notes:
- I used reduced fat cream cheese.
- I increased the amount of shredded cheddar cheese from 1/2 cup to 2/3 cup.
- Instead of the 6 pieces of bacon the original recipe called for, I think I ended up using about 10.  Approximately 6 strips in the cheese ball and 4 in the coating.
- I increased the amount of garlic to 2 cloves from 1 clove.
- I would suggest using plain, butter or garlic crackers for serving. Fritos would work as well.

Mix together the cream cheese, cheddar cheese, cilantro, garlic, cumin, cayenne, lime juice, Worcestershire sauce, half of the diced jalapeños and half of the crumbled cooked bacon. Taste and adjust seasonings and add salt.

Place the roasted pecans and remaining diced jalapeños and bacon on a plate. Stir together so well mixed. With your hands, roll the cheese mixture into a ball, then place on the plate and roll in the jalapeños, bacon and pecans until covered.