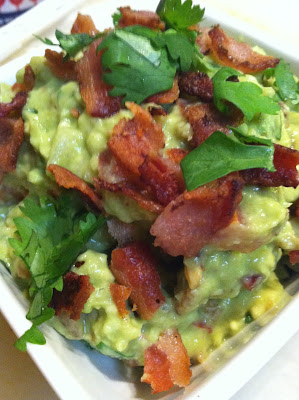 ﻿
I've had my "Fiesta at Rick's" cookbook by Rick Bayless for a couple of years - ever since we visited his Frontera Grill in Chicago.  Though I've read through it more than a few times, I had never actually made anything from it until New Year's Eve this year.
Most of December was spent traveling for us. Some planned, and some unplanned. That's how life works right? After a very hectic and tumultuous end of the month, we decided to stay in for New Year's Eve enjoying our first weekend home in almost 2 months.
It didn't take long for me to decide on a Rick Bayless inspired New Year's Eve Fiesta.  Just because you stay in for a celebration, doesn't mean you can't celebrate!

We've made guacamole more than a few times. Why I've never added bacon before, is absolutely beyond me. This is BLT meets guacamole with the cilantro serving as the lettuce.

The creaminess of the avocado is balanced beautifully by the bright tomatoes, smoky bacon and the bite from the cilantro.  The smokiness of the bacon is only amplified by the smoky chipotles.

This was fantastic. The best guacamole I've ever had. We will definitely be making this again.

A couple of notes:
- I roughly halved the recipe, using half most of the amounts of ingredients called for and 2 avocados. I did however, use the full amount of bacon :) 3 1/2 strips in the mixture and 1 1/2 for topping.
- If you like more heat, don't remove all of the seeds from the jalapenos and chipotles.

In a large (10-inch) skillet, cook the slices of bacon in a single layer over medium heat, turning them occasionally, until crispy and browned, about 10 minutes. Drain on paper towels, then coarsely crumble.

Cut around each avocado, from stem to blossom end and back again, then twist the two halves apart. Dislodge the pit. Scoop the flesh from the skin into a large bowl. Using an old-fashioned potato masher or a large fork or spoon, mash the avocados into a coarse puree. 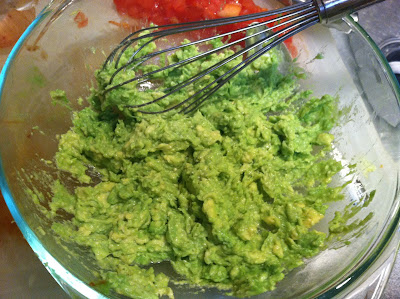 Scoop the onion into a small strainer and rinse under cold water. Shake off the excess water and transfer to the bowl, along with the chipotle chiles, tomatoes, cilantro (save out a little for garnish if you wish) and about 2/3 of the bacon. 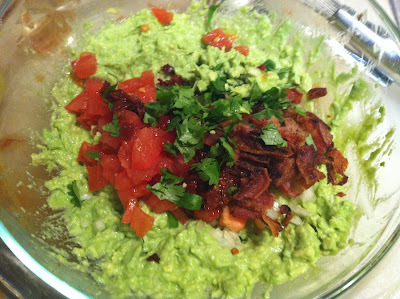 Gently stir to combine all of the ingredients. Taste and season with salt, usually about 1/2 teaspoon, and enough lime juice to add a little sparkle.

Tip: If the tomato is really ripe and juicy, cut it in half width wise (across its "equator"), then gently squeeze out the jelly-like seeds from each half. That'll keep the guacamole from becoming runny.

If you're not serving right away, wait to stir in bacon to ensure the crispy texture!
Appetizer Avocado Bacon Party Fare Party Food Sides Tomatoes