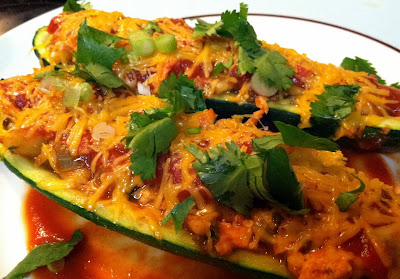 If you are like me, and LOVE yourself some Mexican food, but don't love all the calories that tend to come with it - this is the perfect recipe for you.

I came across this recipe on Skinnytaste and rather than putting it in line with the thousands (literally) of recipes I have tucked away, I decided to make it a few days later.

I was excited to make my own enchilada sauce as I've never done so before. It was so easy and turned out great! Definitely won't be buying any canned enchilada sauce in the future.

These were delicious, and I can honestly say that I didn't miss the tortilla wrappers. They are packed with tons of flavor - smokiness from the chipotles and cumin, sweetness from the tomatoes and zucchini - not to mention a little bit of heat that comes from the chili powder and chipotle chiles.

Though there are multiple steps in this recipe, they are super simple.

This makes a lot of food. I'd suggest pairing with Mexican-style rice, black beans or pintos.

A few notes:
- I increased the amount of garlic cloves in both the sauce and the boats.
- For the zucchini boats, I used chicken broth instead of water. I almost always suggest doing so, for the flavor boost.
- If you have larger zucchini, I would suggest boiling the halves for closer to 2-3 minutes. While you don't want mushy zucchini boats, you also don't want under-cooked/hard boats.
- Don't skip on topping the boats with cheese, green onions & cilantro - each is an important component to the finished product!

For the enchilada sauce:

In a medium saucepan, spray oil and sauté garlic. Add chipotle chiles, chili powder, cumin, chicken broth, tomato sauce, salt and pepper. Bring to a boil. Reduce the heat to low and simmer for 5-10 minutes. Set aside until ready to use.

For the Zucchini Boats:

Bring a large pot of water to boil.

Preheat oven to 400°. Cut zucchini in half lengthwise and using a small spoon or melon baller, scoop out flesh, leaving 1/4" thick. Chop the scooped out flesh of the zucchini in small pieces and set aside.

Drop the zucchini halves in boiling water and cook 1 minute; remove from water.

In a large saute pan, heat oil and add onion, garlic and bell pepper. Cook on medium-low heat for about 2-3 minutes, until onions are translucent. Add chopped zucchini and cilantro; season with salt and pepper and cook about 4 minutes. Add the cumin, oregano, chili powder, water, and tomato paste and cook a few more minutes, then add in chicken; mix and cook 3 more minutes.

Place 1/4 cup of the enchilada sauce on the bottom of a large (or 2 small) baking dish, and place zucchini halves cut side up. Using a spoon, fill each hollowed zucchini with 1/3 cup chicken mixture, pressing firmly.

Cover with foil and bake 35 minutes until cheese is melted and zucchini is cooked through.